All Collections
Manual Modification Tools
How do I use the Combine tool?

How do I use the Combine tool?

In more engineer-focused CAD softwares, this is often called the "Boolean" tool. It is most often used to "glue" a pin lock dummy to a scan (with the Merge/Union tool) before using the Shell tool to create a socket. 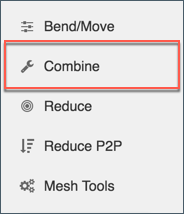 It can also be used to cut holes in a device or find areas of overlap in order to do more complex operations. 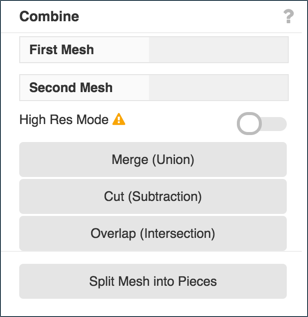 The Merge (Union) feature combines two objects into a single object. For example, let's try merging a cube and sphere (add this into the design studio by selecting Library and then the second tab, Basic Shapes). Use the Combine tool and select both objects to fill in the gray slots next to "First Mesh" and "Second Mesh". An object is selected when there is a dark blue outline around it. Once selected, the object names will fill the gray slots and turn bright green. Select Merge (Union) when you are satisfied with the alignment of both objects. After the cut is complete, a new mesh will be created on the right side of the Design Studio, named "Union #"

The Cut (Subtraction) feature subtracts the area that is overlapping between two objects. If the cube is selected as the "First Mesh" and the sphere is selected as the "Second Mesh",  this feature will cut the sphere out of the cube (and vice versa if you alternate the object selections). Creating these indentations can be helpful for advanced operations. After the cut is complete, a new mesh will be created on the right side of the Design Studio, named "Subtraction #"

Lastly, the Overlap (Intersection) feature creates an object of the overlapping region only. In this case, we expect to see a spherical disc. After the overlap is complete, a new mesh will be created on the right side of the Design Studio, named "Intersection #"

Did this answer your question?